Playground Ideas are 100% nonprofit and this is all free, forever...

Get custom design and on-site support

Find a builder in your country 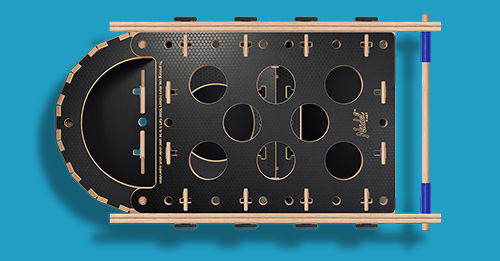 By the team at Playground Ideas & Nudel Kart, June 2020

So why is it so important to use Play as the basis for learning?

Play is a deep need in every brain, so deep in fact that it predates us as humans. All mammals and even birds use play as their first tool for learning the critical fundamental skills for success throughout their life span.

And Play is the tool that the brain uses to learn whatever it is developmentally ready to learn. Whether it is stacking blocks to explore the physical properties of the universe or to simply make a friend. Play is there to help explore, compare, evaluate, practise, and so on, until the goal is mastered.

To prompt children to Play, the brain rewards them with generous doses of positive hormones such as endorphins, dopamine and adrenaline. The result is often happiness, joy, and energetic and loud behaviour which unfortunately is not always enjoyed by adults seeking didactic outcomes for interventions. Yet it is precisely the organic, messiness of Play that is its strength.

Play can prepare children for an uncertain future

Valuing children’s Play is to truly trust that the human brain has its own processes and timeline for development. Observing a child carefully in Play and following the child’s cues is the place any educator or carer should start from if they wish the child to learn something quickly and easily.

This guarantees that the child will not lose the love of learning which is one of the biggest sins many education systems can effect.

And it allows the child to incorporate school learning with ‘other’ crucial learning such as problem solving, socialisation, and skills that are important for success in STEM disciplines and the like. Preparing them for a dynamic future.

Play is a core need for ALL children

Based on almost 60 years of longitudinal data, UNICEF identified 3 core needs for children to thrive particularly after war, disaster and the effects of poverty. Nutrition and love and care are well known but equally important yet currently under prioritised is stimulation.

The combination of toxic stress and a lack of stimulation can delay a child’s development by years.  Because humans develop so rapidly in their early years this effect of trauma has a disproportionately large effect on that child and their capacities going into adulthood . It is now clear that this early development deficit leads to significant reductions in opportunity and capacity in adulthood. When viewing this at the macro scale, the loss of human potential, GDP, and costs to healthcare from a lack of stimulation, factor into the $US billions of losses for nations.

Whilst Play is important for children living with poverty and disadvantage, it also has an increasingly important role in the developed, over-protected, over-scheduled world of the West. For an average child in an average suburb in a developed country such as Australia or the UK, Play adds the unpredictable real world element to learning; it supercharges the brain in all the skills essential for our complex lives. And for the growing number of children living with toxic anxiety about their future, Play creates an oasis of low stress that can help them get back on the path of normal, healthy development.

Play should be a fundamental part of learning.

Things to remember about Play:

There are lots of ways to play. Hughes, ( 2002) suggests there are 16 different types of play. When deciding how to set up for play, consider the following possibilities.

Through the tireless work of so many since the 1970s, Play with caregivers and peers is no longer on the sideline but is now being taken seriously as a critical tool for human development and for economic and civic growth. Across the globe, longitudinal studies show that if a child plays in early life their overall development heads in one direction, and that direction is up (Gertler et al., 2013).

“One longitudinal study showed that adding as little as 1 hour a week of stimulating play for young children increased adult earnings by 42%.“

What are “Loose parts” play?

Loose Parts is simply a name for stimulating materials that children can use to learn how the world works.  Unlike “normal” Playgrounds or most toys, loose parts are open ended and reusable in an infinite number of ways depending on the child’s needs for development.

It is precisely because of their open-endedness that loose parts engage the highest forms of thinking and interaction such as creativity, problem solving, social skills and emotional intelligence. They are also excellent for psycho-social support to children from traumatised and disadvantaged backgrounds and can be tailored to the various contexts that it is used in.

There is a reason why LEGO, MECCANO on one hand, and Matchbox cars and Dolls like Barbie on the other, are the world’s most popular toys. It’s because they have 2 key characteristics. Infinite possibilities for the former and imagination and role play for the latter.

Playground Ideas (PI) is an open source resource that supports people in all countries to provide environments that help children reach their full developmental potential. PI now has over a decade of experience in creating and sharing resources online (manuals, designs, fundraising tools etc) to support communities at extremely low cost to build a play space anywhere in the world.

The team constantly updates and provides new materials and resources to support the changing world of Play, whether it’s a need for more “nature” Play or help in planning child friendly cities.

In the last 10 years, PI has grown exponentially from one Playground in 2007 to over 800 Playgrounds in 2019. It has now supported more than 3,600 community Play projects in 143 countries, enabling over 1.8 million children to access stimulating Play in some of the harshest and most desperate contexts on earth.

But in some areas we were still failing…..our community-based model didn’t work for all organisations, governments and school systems. Custom-built Play spaces require a lot of time, volunteers and resources. We needed a simpler solution without compromising on meeting children’s needs.

Playground Ideas has spent the last two years developing a new way to scale up Play simply and quickly across the globe without compromising on the deep, creative and sustained Play that children need.

Developmental needs of children across the globe are remarkably similar; all children have often unrecognised but powerful internal tools to drive their development. With the assistance of Professor Anita Bundy from the University of Sydney and now the University of Colorado, Nüdel Kart has been designed as a deconstructable, mobile Play kart that can be reconfigured in endless ways to encourage self-directed learning and pair with the child’s urge to explore, experiment, imagine and Play.

Nüdel Kart has since been tested in refugee camps, private schools, children’s museums and even airports. It is inclusive and for all-abilities; it is non-gendered and non themed (no castles or pirate ships), so the children themselves can create a space that works with their individual needs and this can be started afresh every day as their skills and abilities change.

The Nüdel Kart aims to:

Nüdel Kart encourages both infinite possibilities and imagination in a real child-sized and social environment with lots of children. It’s the combination of these elements that truly sets a child’s brain on fire.